A profit squeeze in the making?

Investment in agriculture is key for achieving many of the United Nations Sustainable Development Goals. On-farm investment in agriculture has doubled over the past 20 years and as a result agricultural production has grown rapidly. This investment boom was supported by a combination of high agricultural prices in the late 2000s, low energy costs, ample money supply, and low interest rates. Agricultural production growth was good news for many, including consumers, providing them with stable access to food at affordable prices. That’s the good news. But the bad news is that the key conditions that made these investments viable are deteriorating, and rapidly: interest rates are rising and output prices are falling. Measured by the U.N. Food and Agriculture Organization (FAO) Food Price Index, agricultural prices are at their lowest level since May 2016.

Data from the FAO Statistical Databases (FAOSTAT) confirm the global upwards trend in farm investment this century. On-farm investment doubled over the past 20 years, and while the expansion was a global phenomenon, emerging economies like China and India led the expansion. With higher investments and rising output, trade in agricultural products expanded in parallel, benefitting particularly emerging economies, whose agricultural exports nearly tripled over that period.

From boom to bust

As interest rates rise and output prices fall, farmers typically adjust their operations to the new business environment. In the short-run, they will make every effort to reduce variable costs, including through sacrificing the labor and environmental standards of their operations. In the long-run, prolonged cash flow difficulties will affect the replacement cycle for fixed capital in agriculture. Simply put, the low and deteriorating profit margins faced by farmers today mean that they are likely to buy fewer machines and implements to produce crops, building fewer barns and structures to produce milk, meat, and eggs. The recent slowdown in on-farm investment is an indication that this process has already started. If this trend continues, global agriculture may be faced with considerable underinvestment down the line and consumers may eventually see higher and, as happened one decade ago, more volatile prices.

Agriculture is an inherently risky business. Farmers know that they are exposed to the vagaries of weather in the short-run, to climate change in the long-run, and to the stickiness of their investment decisions at all times. This is no call for the public sector to single-handedly assume these risks, despite growing concern at Government level that agriculture may not be able to deliver what was expected from it for achieving many goals of the 2030 Agenda for Sustainable Development. Instead, anybody who is part of the global food system, which basically means everybody, should think about possible measures to tackle the profit squeeze, otherwise it would lead to lower food standards today, and weigh on food supplies tomorrow. Particularly worrisome for everyone should be the prospect that a lasting crisis of the sector could have adverse consequences in terms of compliance with environmental, labor, and product standards. In the worst case, this would amount to a race to the bottom where everyone, including farmers, their families, farm laborers, input providers, traders, manufacturers, consumers, and the environment, will lose. 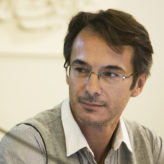 Pedro Arias is a native of Uruguay and an Economist for the Trade and Markets Division of the Food and Agriculture Organisation of the United Nations (FAO). He currently monitors trends and flows in agricultural Foreign Direct Investment (FDI), and promotes and supports the adoption of the Principles for Responsible Investment in Agriculture and Food Systems (CFS-RAI). Pedro’s hobby is running a family farm in Umbria, Italy.

Sowing the Seeds of Change: Integrating Education and Agriculture in Rural Nepal

Technology May Change The Entire Food System For Good and Bad: Refresh