Barilla Center for Food & Nutrition (BCFN) Alumni Sujardin Syarifuddin believes that increasing opportunities for innovation, research, and collaboration for youth is essential for building the next generation of food and agriculture leaders. Founder of the GreenNation Youth Project in Indonesia, Syarifuddin works to educate young people on environmental issues and increase their capacity to take action to resolve environmental problems. His project, The Miraculous Moringa, was a finalist in the 2013 BCFN YES! Competition, demonstrating how consumption of Moringa oleifera leaves could help prevent nutritional deficiency and malnutrition in children under five.

Food Tank had the opportunity to talk with Syarifuddin and discovered how the agriculture education in his childhood helped pave the way toward a career in food and agriculture research and entrepreneurship.

Food Tank (FT): When did you decide that you wanted to become involved in building a better food system? 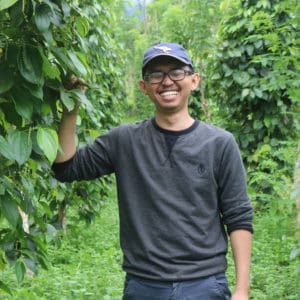 Sujardin Syarifuddin (SS): When my team and I reached the final of BCFN Young Earth Solutions in 2013, I never thought that the issues surrounding the food system or sustainable agriculture could change my perspective about certain things—like why the number of obese people outnumbered children suffering from severe starvation and malnutrition, or why more and more young people seem to be discouraged to be active in participating in agriculture. Since then, and while working on my “The Miraculous Moringa” idea with my team, I tried to increase public awareness about these issues in the best way I knew how—by writing about them. Since 2015, I’ve written articles about the issues and get them published in several media outlets including The Jakarta Post, IDN Times, and the BCFN Magazine. I started relatively fresh in 2013, and I couldn’t be more proud to see that more bright minds have come to the stage at BCFN YES! to showcase their works in building a better food system.

FT: How did the BCFN Yes! Research Grant Competition support your research endeavors?

SS: Becoming one of the finalists of BCFN YES! has been a milestone and such a life-changing experience for me personally. The competition gave me and my team opportunities to not only showcase our work in front of audiences abroad, but it also became a powerful platform for us and other young people to seriously act on the issue of food sustainability and related topics. My team’s confidence was boosted by the event. We recently met the Vice Mayor of Makassar City to discuss Morbi+, a moringa-based product my team has been developing following the 2013 BCFN YES! Competition.We have continued to enter research competitions to support our project post-BCFN YES! Although we haven’t secured funding, the feedback we have received from experts and fellow student competitors has been so motivating that we want to keep working on this project.

The BCFN alumni network is also a great avenue for everyone to share what they have been up to, their research progress, and to continue their efforts to make food system issues visible to everyone. In 2016, I was granted the opportunity to represent BCFN Alumni as media representative during the Global Entrepreneurship Summit that was held at Stanford University.

FT: You’ve since gone on to found GreeNation Youth Project—can you tell us about the project and other initiatives you’re involved in?

SS: I founded GreeNation Youth Project in 2014 after participating in the ASEAN Youth Volunteer Program hosted by the National University of Malaysia in 2013. The project focused on educating young people in Makassar, Indonesia, to care about the environment and to develop the capacity to be an environmental agent of change. With the support of volunteers, mostly university students and recent graduates, as well as local communities, GreeNation Youth Project successfully ran a number of activities. These included a handicraft workshop involving teenagers and orphans in Antang District, an environmental education sharing session with participants from the Indonesian Blinds Union in Makassar, a power of writing workshop for university students, and GreeNation Youth Dialogue which covered three main themes of environment, education, and entrepreneurship. Its fan page on Facebook has almost reached 3,000 followers.

In October last year, I created an Instagram account called Choked By Food, an online platform where I endorse mostly small- to medium-sized local food vendors based in Makassar City. I help advertise their products while also regularly posting information about maintaining a healthy lifestyle and quotes relating to food and agriculture. Since it’s initiation, it’s gained close to 2,000 followers and I have endorsed more than ten local vendors, most of them for free. We’ve posted more than 70 food photos and quotes about culinary and healthy lifestyles as well. I’ve received positive feedback from the vendors, and I hope to reach more—especially those who sell the traditional food of Makassar.

FT: What other innovative ways can food and agriculture be reintroduced to younger generations?

SS: Back when I was in primary school, in a small village of Simbune, Indonesia, I had the opportunity to regularly cultivate plants on school soil in a subject called Muatan Lokal—meaning ‘local things’. The planting area, just like in other schools in neighboring villages, was specifically provided for student’s agricultural learning and practices. It was pretty simple; students would be asked to bring either pepper or cocoa tree seedlings. On Saturdays, the ‘Kerja Bakti’—meaning ‘collective working’ or ‘working together’—day, students would check the progress of their plants, watering them and maintaining the planting area. Students were responsible for their plants, so if the plant died the student would have to replace it with a new seedling and redo the process. Students were very upset and embarrassed when the plant died because there was a sense of competitiveness among students.

I always thought that the reason we students participated in this subject was simply because the area behind the school building was unused and it would be better to plant something there. The reason was actually that most of our parents, residing in Simbune, Indonesia, were farmers, and have carried on a long-standing tradition as cocoa and pepper producers. I now believe that the subject helped keep local agriculture and food practices alive through education. I believe that education is a powerful tool to reintroduce food and agriculture to the younger generation in a fun way, that can include both teachers and, parents. By incorporating food and agriculture into the curriculum and other educational tools, food system issues can be understood earlier by the younger generation.

FT: Why do you think it’s important that youth are active participants in shaping the future of global food systems?

SS: Given that there will be 9 billion people to feed by 2050, the younger generation inevitably has an important role to play in prioritizing a sustainable food future as they will eventually become country leaders, policymakers, educators, and entrepreneurs. I think it’s imperative that youth are given more spaces through research and funding opportunities, scholarships, and other initiatives to empower them to become creative, innovative thinkers to solve the world’s pressing food and agricultural problems.

Eva Perroni was a Research & Writing Fellow at Food Tank and a freelance researcher-writer and activist focused on promoting sustainable food systems. She holds an MA in Development Studies from the University of Melbourne, maintaining a strong research focus on global food security and food and agriculture politics. From learning traditional Sicilian recipes in her Nonna’s kitchen to campaigning for Food and Climate Justice, Eva’s love and passion for fair and healthy food are continuously growing. Follow Eva's food reporting at EvaPerroni.com

Mailee Walker on Food Leaders: “We can truly be a considered a movement to be reckoned with”

Food, Business, and Sustainability: An Intersection Revolutionizing the Food System