For Niman Ranch lamb rancher Jeanne McCormack, raising sheep is a way of life that spans generations and continents.

“My father’s family came from the Isle of Arran off the western coast of Scotland,” McCormack tells Food Tank. “They had lost their farming rights on Arran during the Clearances, beginning in 1821.”

Along with other families from Arran, McCormack’s relatives immigrated to New Brunswick, Canada in the 1860s. But, due to rocky soil and harsh farming conditions, her grandfather, Dan McCormack, and his brother, John, eventually set out for California in the late 1880s. They settled and began farming in the Montezuma Hills of Northern California, where Dan McCormack’s Ranch was born.

“My grandfather and his brothers maintained the system of rotation of small grains – wheat, barley, oats – and sheep. This is the same rotation that Al and I still do today,” says McCormack.

McCormack and her husband, Al Medvitz, had been living in Boston before they returned to the ranch in 1987 to learn from McCormack’s father, Wallace. After Wallace died in 2000, the couple took over the ranch and have run it together ever since.

Since the 1880s, the ranch slowly expanded from 1,860 acres to 3,700 acres and now has four employees, McCormack tells Food Tank. Jeanne and Al raise sheep and various grains and also grow about 50 acres of wine grapes.

While the McCormack’s primarily raise sheep for meat and wool, during the 1990s they also sold lamb directly to restaurants in San Francisco. Through these restaurants, the couple learned about and became involved with Niman Ranch. In 1992 they became the first lamb ranchers to sell lamb to the network. Today, McCormack sells about 1,000 lambs to Niman Ranch between June and November each year.

“To us, being part of the Niman Ranch family means we have a secure market…We know roughly how many lambs we will sell each year, and roughly what the price will be,” says McCormack. “It gives us a security that is rare.”

Niman Ranch is also committed to the same sustainable livestock practices that McCormack’s family has practiced since they held their farm in Arran. “The sustainable practices we use are crop rotation with grain and sheep, which we have used since the 1800s whether in Scotland, New Brunswick, or here in California,” McCormack tells Food Tank.

Practices like these are not just traditional; they also prevent excess chemicals from spreading into the environment, McCormack notes. Sustainable farming is a key component in combating and minimizing the effects of climate change. It is a way of life that not only produces food but also heals the earth.

McCormack hopes that beginning farmers and ranchers will take up these sustainable techniques, but she acknowledges the difficulty of breaking into the industry as a young person, particularly without any family ties to farming. She still encourages young people to take a chance on farming and farmers to take a chance on hiring youth.

“To succeed in farming requires careful study of the kind of production you want to do and to keep track of costs. Always keep an alternative path in mind in case weather or markets change quickly,” says McCormack. “And remember that you have to love what you are doing because it [farming] is not easy or secure, so find satisfaction in the task itself.” 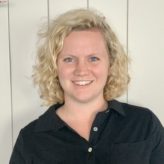 Hannah is a Food Tank Research and Communications Intern. This past fall she completed her Masters of Science in Food and Rural Development Research from Newcastle University. Her thesis explored the links between food security, land rights, and gender in the Kamuli District of Uganda. Hannah’s experiences with subsistence agriculture and food security around the world have created a passion for understanding and working to solve issues surrounding our global food system. In her free time, Hannah enjoys playing her guitar, reading, and watching British baking shows.