A recent study from Columbia University finds that a severe natural disaster could cause the near-total depletion of the United States’ food reserves. This loss may make the U.S. and other countries more vulnerable to future disasters.

Between 1980 and 2019 climate-related disasters increased by more than 100 percent, according to the International Disaster Database, Université catholique de Louvain – Brussels – Belgium. The study seeks to understand how a natural disaster comparable to the U.S. Dust Bowl – which caused a 36 percent decline in wheat production in the 1930s – would impact global agriculture trade.

The researchers conclude that 94 percent of the U.S. wheat reserves, held for emergency food supply, would be exhausted. It would also cut wheat exports in half.

Additional findings show that while the reserves are sufficient to fend off food insecurity initially, the U.S. and its trade partners would become extremely vulnerable to a future crisis of any size.

“With more extreme weather due to climate change, it is critical in the short term that we have safety nets in place for farmers and agricultural communities if they experience a sudden loss of crops,” Alison Heslin, PhD, Postdoctoral Research Scientist at Columbia University and Co-author of the study tells Food Tank.

To understand the effects of a natural disaster, the researchers used a food shock cascade model, an economic tool that simulates a food supply shortage. The model considers country-level wheat production, reserves, and trade data.

Heslin explains that agricultural reserves are essential in the disaster scenarios modeled in the study. They help ensure that sufficient food is available during extreme weather events and that food prices remain stable, according to the Institute for Agriculture & Trade Policy.

In order to be most effective, Heslin says that reserves should be composed of different crops. “A diverse profile of nutrient sources can serve to decrease risks from production shocks in a particular commodity or a particular region,” Heslin tells Food Tank.

She explains that U.S. reserves are also important for international food security. According to the study, the U.S. is central to the global food trade network, and supplies wheat to over 170 countries that have little to no reserves of their own.

She argues that these countries’ strong reliance on the U.S. makes their food systems vulnerable. To build resilience Heslin tells Food Tank, “Government support in food distribution or food subsidies would be critical to ensure that sufficient, nutritious food is available to all members of the population.”

While this study models the impacts of a natural disaster, Heslin believes it can also inform researchers’ understanding of the COVID-19 crisis. She says the pandemic and the resulting supply chain disruptions highlight shortfalls in the food system.

“[The study is] an opportunity for people to learn how concentrated and inflexible certain components of the food system are,” Heslin tells Food Tank. “Hopefully [that] leads to changes to ensure our food system is more dynamic in the face of future crises.” 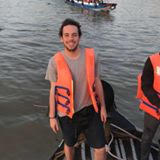