A new grant program is working to promote food access on Chicago’s South and West sides by funding farmers of color.

The Fresh Food from Farmers of Color Fund (FFFC) is a collaboration between the Illinois Department of Human Services (IDHS) and Experimental Station, a nonprofit community infrastructure organization in Chicago’s Woodlawn neighborhood on the South Side of the city.

The USD$650,000 grant will support Black, Indigenous, and farmers of color (BIPOC) in the Chicagoland area to increase food production and distribution.

Black and Brown communities on Chicago’s South and West sides disproportionately lack access to fresh and affordable food, according to researchers at Northwestern and the University of Chicago.

Black and Latinx adults were on average 25 percent less likely to report easy access to fresh fruits and vegetables compared to their white counterparts, according to the Chicago Health Atlas. Black communities have particularly low access to any type of grocery store.

And according to Block Club Chicago, COVID-19 has exposed and exacerbated the underlying health issues including diabetes, heart disease, and high blood pressure attributable to the city’s persistent food apartheid.

Food apartheid is a term that describes the active exclusion of low-income neighborhoods and communities of color from adequate access to healthy food. The term implicates systemic racism in creating disproportionately high rates of supermarket scarcity through gentrification and discriminatory housing policies.

And since 2006, Experimental Station has been dedicated to helping residents gain better access to fresh food on Chicago’s South Side. It is home to the 61st Street Farmers Market, a weekly market providing locally grown produce and LINK match programs.

The goal of the grant program is to administer funds to farmers so that they can sustainably increase their yields. Grantees will then supply South and West side markets as well as Women, Infant, and Children (WIC) Food & Nutrition Centers with produce. FFFC also plans to connect residents and WIC Food and Nutrition Center clients to hubs of locally-grown produce in their communities.

“What COVID-19 has done, for better or for worse, is challenge all levels of philanthropy, government, and non-profit support,” Merritt tells Food Tank.

She says that the pandemic has thrown the city’s food system inequities into sharper relief. This urgency has encouraged the government to acknowledge the historic challenges that Chicago’s Black and Brown communities face. But rather than leaving the plan of action up to the state government, the fund’s broad range of support allows community members to make the main decisions.

In partnership with Grow Greater Englewood and the Illinois Stewardship Alliance, Experimental Station is creating a review committee of food system advocates around Chicago.

“[IDHS] didn’t come to us with the parameters already figured out,” Merritt says. “They directly asked Experimental Station for support and for help. That’s what most community-based organizations would want.” 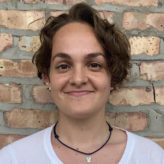 Maya Osman-Krinsky (they/them/theirs) is a native New Yorker currently pursuing their B.A. in Linguistics and Global Studies at the University of Chicago. Maya is focusing their degree on the role of language in healthcare, and they plan to expand their passion for global public health into the realm of food justice. Maya is an active home cook and enthusiastic eater and hopes to use their love for food to further the conversation about what an equitable and sustainable food future could look like.