Filmmaker William Reid spent just US$5.50 on food in two years. Institutional food waste—mainly supermarket and restaurant dumpsters—provided all the other food he consumed. His upcoming documentary “Trash Empire” records this two-year journey: Reid’s personal attempt to uncover how our food system can reduce waste while helping supply more nutritious food to those who need it.

With a background in food systems work, Reid drew on his experience with Feedback’s Feeding the 5000, as well as work with Food Not Bombs, a New Mexico-based nonprofit organization that coordinates the donation of excess food to those in need before it becomes food waste. Reid studied film and electronic media at American University in Washington, D.C.

Food Tank had the chance to speak with Reid about his dumpster diving experience and the message he hopes to convey with “Trash Empire.” Although he says he was eating what he considered healthier, higher-quality food from the dumpsters than he would have been able to purchase, Reid does not aim to encourage consumers to dumpster dive. Rather, he hopes “the absurdity of his diet” will spotlight the volume of waste in our food system and that much of this wasted food is perfectly safe for human consumption. 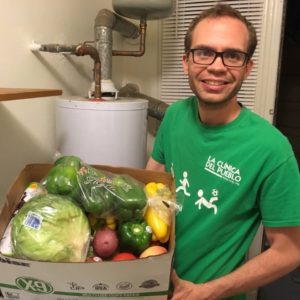 Food Tank (FT): How did you get started diving in dumpsters as a way to procure food and when did you decide to make thrown out food your sole source of food?

William Reid (WR): I started dumpster diving after getting involved in an organization called Food Not Bombs that solicits donations of would-be-wasted food and then redistributes it to people in need. I often did food pickups and helped cook the food. A lot of businesses donated the food they couldn’t sell to us and it was clear that this food waste was perfectly fine. A few volunteers talked about how they had dumpster dove before, and found plenty of good food. One of those volunteers took me dumpster diving and we found a ton of food. That experience really impacted me and got me thinking.

For five months after that, I quietly dumpster dove for all of my food, just to see if it would work. Not only did it work, but I was eating better food than I would have been if I was buying it. A lot of the food was from expensive organic grocery stores—these weren’t places that I had ever shopped before. After five months, I stopped being shy about it and told people.

FT: What has surprised you most about food waste in your two years of eating almost entirely thrown out food?

WR: This answer is a bit nuanced because at first everything surprised me. I’ve seen dumpsters entirely full of almost anything you could imagine buying. While not all dumpsters are pristine, some are surprisingly clean and I have seen dumpsters full of plenty of fresh products. Aside from making a film about it, I also used to take pictures of the food I got each time because the abundance was so shocking. I mostly stopped taking those pictures after a while because that shock factor wore off. It is clear that for some grocers, this level of waste is the norm. Now maybe that’s what’s most surprising: the fact that this diet feels totally normal to me now. The scale of waste we’re dealing with here shouldn’t be normalized.

FT: How do you find your dumpster diving diet stacks up to what would generally be considered a typical healthy American diet?

WR: Dumpster diving varies from store to store and neighborhood to neighborhood. If I lived in a food desert, my diet wouldn’t have looked so appetizing. In those areas, food in the dumpster may tend to look more like scraps, or it may be predominantly heavily processed foods. However, given the neighborhood I was living in and its abundant dumpsters, my diet while filming “Trash Empire” looked almost identical to the diet of most Americans. I had plenty of access to junk food, to be sure, but also plenty of access to healthy foods. I had the same choices and options as any person who goes shopping.

FT: Are there any trends, like seasonality, that you notice in the food that supermarkets throw away?

WR: There are definite trends to dumpster diving. If you like candy, try dumpster diving shortly after Halloween, Easter, or Christmas. You’ll find plenty of it. Foods that have seasonal packaging aren’t an easy sell after a holiday even though they haven’t even expired. A lot of stores don’t bother with it and just throw it all out.

FT: Your upcoming film “Trash Empire” will debut this fall. What are you aiming to achieve with this documentary?

WR: My goal is multifaceted. I am hoping that the absurdity of my diet will reach viewers and highlight that much of the food we waste is safe to consume. I’m also trying to provide viewers with a broader context for food waste and why it might happen. I think many of the people who I interviewed have things to say that will surprise a lot of folks. I think that as we better understand our food, where it comes from, and why it might be wasted, we will be better suited to prevent waste in general.

FT: What change do you want to encourage in “Trash Empire’s” viewers?

WR: The first thing I want is for viewers to leave feeling like they’ve learned something. I think a lot of people care about food waste, but don’t know what they can do next. Knowledge can be empowering. In order to advocate for the changes that need to happen in order to reduce waste, knowledge of the issues is important.

FT: Now that your film is complete, do you plan to continue to eat only food discarded by supermarkets and restaurants?

WR: As long as food waste is still happening, dumpster diving will be a part of my diet. It’s kind of like treasure hunting, and the thrill of finding tons of perfectly good food hasn’t gone away, even if I’m not entirely surprised by it anymore. I will be returning to purchasing some products, but I have a greater awareness of the impact that my decisions as a consumer may have on the industry as a whole. There are definitely some foods that are better for the environment than others, and there are some foods that are packaged or shipped in ways that are more damaging than others. I keep that in mind because I don’t want to support business practices that will cause unnecessary harm to the environment. Also, it’s worth noting that there are some foods that I may never buy again. This is not because they are bad for the environment, but because I’ve seen them in such great quantities in the dumpster that I can’t bring myself to pay for them.

FT: What do you expect it will take for America to make a drastic reduction in both industrial and household food waste?

WR: I think that right now it’s our job to continue educating people about their food—not just about food waste, but about where their food comes from. It’s no wonder that people avoid purchasing ugly fruits and vegetables if they don’t fully understand how their food is grown. That disconnect from the origin of our food to our kitchens contributes to waste and helps to support industry practices that may not always be the best for the environment. As we change our individual practices and build a movement I hope that industry and politicians will take note.

FT: What advice can you give consumers for helping to contribute to food waste reduction and increased food security in America?

WR: A good place to start is to stop taking ‘best by,’ ‘use by,’ and similar labels so seriously. The federal government doesn’t regulate these for most foods, and food doesn’t magically go bad once that date is reached. Many foods can safely be consumed years after those dates have passed. Use your sense of smell or taste to determine if something is good to eat. Also, consider putting food that may be about to go bad in a particular part of the fridge to encourage yourself and your family to use it. If you can, try to learn about your food. This will make you better suited to make decisions that are better both for you, for the communities that grow your food, and for the environment.

Rocco is a research intern for Food Tank. A native of Wisconsin, she earned a BA in history from Dartmouth College and later a Masters in Public Health from the Tulane University School of Public Health and Tropical Medicine. At Tulane, she studied Global Community Health and Nutrition with an emphasis on food security and nutritional assessment.

Recently, Rocco moved to Sacramento, CA, where she is conducting research in violence prevention.