For the first time, food and food systems are a prominent fixture in international discussions around climate change and biodiversity loss. But space for stakeholder collaboration and dialogue at is increasingly necessary to ensure goals set at UN conferences are met. What better place than around the dinner table?

Through a series of gatherings of global food systems visionaries in Sharm el-Sheikh, Egypt and Montreal, Canada, WWF and Eat4Change partners are bringing more people together in conversation to ensure food and food systems change remains at the center of UN conference discussions. Through specially curated evenings with randomized guest seating, these gatherings serve as a catalyst for dialogue among diverse global stakeholders and changemakers—a reminder for what effective change looks like as we consider the future of our food systems.

On November 15, 2022, nearly 200 country delegates, farmers, non-profit organizers, companies and youth activists from around the world concluded another day at COP27 in Sharm El-Sheikh, Egypt and headed to the Eat4Change dinner at the Dreams Beach Resort hosted by WWF, The Global Alliance for the Future of Food, The Rockefeller Foundation, The Food and Land Use Coalition, and The Global Alliance for Improved Nutrition. As the second week of COP27 began, it became clear the conference would not result in the aggressive goals necessary to achieve climate resiliency and arriving guests voiced their exhaustion and disappointment. The Eat4Change dinner proved the reinvigoration many needed.

To kick off the evening, moderators Danielle Nierenberg, Food Tank, and Brent Loken, WWF, set the scene for a celebration of food systems as a focus of COP programming. Sanjoo Malhotra, curator for the Eat4Change dinners and WWF manager of the Global Action Platform on Sustainable Consumption and Diets, explained the silo-breaking concept for the evening and introduced Egyptian Chef Montaser Masoud who had curated a sustainably-minded, plant-forward menu with locally grown ingredients inspired by Eat4Change’s sustainability principles.

During the dinner, guests enjoyed one of the first screenings of “Food 2050”, the Rockefeller and Media RED film that debuted at COP27, followed by a discussion with Roy Steiner of The Rockefeller Foundation. Visionaries and experts featured in the film were seated throughout the audience including Chief Caleen Sisk and Matte Wilson of the Sicangu Food Sovereignty Initiative, physician Rupa Marya, and producer Andrew York.

Following the film, Loken introduced WWF’s video, “The Great Food Puzzle” which highlights the impact of food systems issues on people and planet, and the importance of connecting local, national and global stakeholders. Guests then heard from Costa Rican Indigenous youth activist, Heylin Sanchez from the Kábata Könana Women’s Association who spoke of the importance of localized, place-based efforts and holistic concepts of food and life at the center of Indigenous worldviews. The evening concluded with dancing and continued discussion among guests including Indigenous farmers, non-profit organizations, small and large-scale companies, media groups and activists around their efforts towards change and goals for the future.

Momentum from the COP27 Eat4Change dinner in November carried over to the COP15 UN Biodiversity Conference held in Montreal in December, with the goal of reversing unprecedented nature loss by 2030 through the global biodiversity framework (GBF). Food again held a prominent place at the conference and was especially highlighted during “Food Day” a full day of side-events on December 14th.

COP15’s Food Day culminated in the fourth Eat4Change Dinner hosted by WWF in partnership with the FAIRR Initiative, World Business Council for Sustainable Development, Global Alliance for the Future of Food, and the Environmental Defense Fund. Guests including national level stakeholders, non-state actors, civil society groups, youth, indigenous groups, business and finance stakeholders gathered under the Société des Arts Technologiques’ 3D dome at Montreal’s FoodLab for an immersive evening of conversation on the intersection of food and biodiversity loss.

These Eat4Change gatherings have served as an embodiment for food systems change, where real conversation happens between stakeholders at a shared table. Though reflections on COP27 were mixed, according to WWF, “there is no doubting that food was on the table” much more than at previous COPs. Some successes from both events were salient — more than 100 organizations are supporting an ambitious and holistic approach to the new UNFCCC Sharm El-Sheikh Joint Work on Implementation on Agriculture and Food Security, and COP15 resulted in a historic agreement to reverse nature loss by 2030, including through agroecological approaches and reducing food loss and waste—but much more collaborative work will be needed to implement these agreements. To achieve climate resiliency and a thriving natural world, food must remain on the agenda.

As we look to the next UN conference, COP28 hosted by the UAE in 2023, plans are in place for more spotlighting of food systems, more voices at the table, more collaborative efforts, and more honest conversations around the intersection of human and environmental rights. Food is set to be a permanent fixture at future UN conferences and gatherings like Eat4Change will play an important role in creating lasting connections between global stakeholders beyond the conference stage. 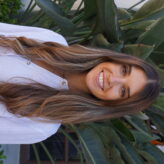 Kenzie is a PhD student in Anthropology at the University of California, Santa Barbara where she studies the edible insect industry and cultural food perceptions. She works as an events coordinator with Food Tank, and as an organizer of The Future of Food event series with Little Herds. Kenzie holds a BA in anthropology (Kansas State University), a master’s in cultural heritage management (Durham University), and a master’s in anthropology (University of California, Santa Barbara) focused on food systems reform.