Abby Maxman is President of Oxfam America, a nonprofit organization working to tackle and create lasting solutions to the root causes of global poverty. Oxfam America is part of an international confederation of 20 nonprofit organizations working with partners in more than 90 countries to achieve this goal. Maxman joined Oxfam in 2017, bringing more than 25 years of experience in international humanitarian relief and development to her role as President.

Before joining Oxfam, Maxman served as Deputy Secretary-General and Vice President of International Programs and Operations of CARE International. Her work has included regional and country leadership and management roles across many countries in Africa, Latin America and the Caribbean, Asia, Europe, and the Middle East.

Food Tank had the opportunity to talk with Maxman about Oxfam’s work, the right to food, and solutions for some of the world’s most pressing challenges such as climate change and gender inequality. 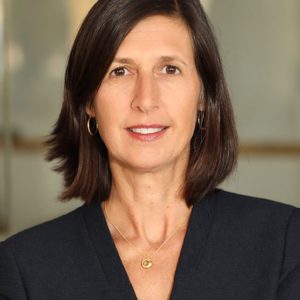 Food Tank (FT): Your career has led you to work in many communities facing different food, agriculture, and poverty challenges. Can you share the most inspiring grassroots stories and high-impact solutions to these challenges you’ve encountered?

Abby Maxman (AM): The famine in Ethiopia during the 1980’s really opened my eyes to the vast poverty and inequality in this world. As a high school student, I remember seeing photographs of severely malnourished children and parents and those images were seared into my consciousness. So much so, that when I graduated from college, I chose to enter the development world, signing on as an agriculture and community development worker in Lesotho.

Since then, I have spent most of the last thirty years working in the international humanitarian and development sector. My journey has taken me to post-genocide Rwanda, the Middle East, the south Caucuses, Haiti, Ethiopia, and beyond. The reality is that nearly 75 percent of the world’s poor people live in rural areas, where most of them rely on agriculture for their livelihoods. They face the high risk of extreme weather and lack the resources to grow or buy enough to feed their families.

At Oxfam, we champion farmer-led innovations like the System of Rice Intensification (SRI) in Cambodia and Vietnam that empower farmers to grow more food more cost-effectively and sustainably. The practice involves simple but powerful steps, like spacing rice seedlings farther apart on a regular grid rather than randomly, using water intermittently rather than continuously flooding paddy fields, and using organic versus synthetic fertilizer. Oxfam has reached more than one million farmers and families, and on average this approach gives them a 10–100 percent increase in rice production and up to a 50 percent savings in water usage.

Another Oxfam program, Female Food Heroes, focuses on offering new skills and opportunities for collaboration among female farmers in countries like Tanzania, Nigeria, and Ethiopia. In many poor communities, women are the ones who grow their families’ food, yet women in the developing world are often denied access to loans, land ownership, and the time needed for agricultural production. In Tanzania, for instance, the program produces an annual reality TV show that airs nationwide and elevates the status of these women farmers in their communities and celebrates them as the real heroes they are.

On a much broader, systemic scale, Oxfam ran a powerful consumer action-based campaign called Behind the Brands. The campaign assessed the social and environmental policies of the world’s 10 largest food and beverage companies and called on them to take the critical next steps to improve their policies and practices to create a just food system. A key aspect of the campaign was to provide consumers with the information they need to hold these companies accountable for what happens in their supply chains. Consumers hold a tremendous amount of power.

FT: Can you describe the principles of Oxfam’s rights-based approach in its food and agriculture campaign work?

AM: Many people think hunger is about too many people and too little food, but that is not the case. At Oxfam, we know that hunger is about power. Its roots lie in inequalities in access to resources and opportunities.

Everyday, lack of access to water and fertile land, make it more difficult for food producers, especially women, to feed their families. Increasingly extreme and erratic weather patterns are just worsening the situation, disrupting agriculture and food supplies, and exacerbating conflicts around the world. The power to control scarce resources sits not with the billion-plus farmers who produce food, but with companies and governments. However, increasingly savvy consumers are pushing the industry to rethink ‘business as usual.’

Oxfam’s approach is to help build a better food system: one that produces enough for a growing population and empowers poor people to earn a living, feed their families, and thrive. We seek to fight hunger by urging governments and companies to invest in small-scale producers and take immediate action on climate change.

We believe we can bring about transformational change by increasing the productivity, self-reliance, and economic opportunity of small-scale farmers, especially women, who depend disproportionately on agriculture for income and food. This includes increasing the access of farmers to natural resources like water and ownership of resources like land, as well as improving the preparedness of farmers in the face of more frequent and extreme weather events. And holding governments and businesses to account for the impacts of their policies and practices on global food security.

FT: An urgent call to action has been issued by the United Nations to counter the threat of famine in several countries—how can the global community work together to effectively answer this call?

AM: This is the worst humanitarian crisis since World War II, with 30 million people facing extreme hunger in South Sudan, Somalia, Nigeria, and Yemen. And nearly 10 million of those people are on the brink of starvation. And unfortunately, only just over half of the US$6.5 billion required to significantly address this crisis has been pledged.

There are huge forces at play—drought, climate change, conflict, poor governance. But there are no excuses: famine is a human-made crisis. Even if famine is not declared, these extreme levels of hunger are already unacceptable. With so much wealth in the world, no one should be experiencing the pangs of extreme hunger or have to worry about how they will feed their children their next meal.

Oxfam has been proud to join the Global Emergency Response Coalition, a U.S.-based humanitarian alliance made up of eight U.S.-based INGOs, including CARE, International Medical Corps, International Rescue Committee, Mercy Corps, Plan International, Save the Children, World Vision and Oxfam. We hosted an appeal in July 2017 to address the hunger crisis.

Oxfam is continuing to call for generous and urgent funding, safe humanitarian access to deliver needed aid, and a collective commitment to tackling the root causes of this crisis. But the U.S. must take the lead by ensuring money is distributed quickly and efficiently to frontline agencies working directly with the most vulnerable people.

FT: What longer-term solutions need to be implemented to ensure everyone has access to safe and sufficient food?

AM: One of the U.N. Sustainable Development Goals is to end hunger in all its forms by 2030. Giving small-scale farmers the means to manage their own resources and build the self-reliance of their communities is critical to achieving this goal, and may ultimately lessen the money that wealthy nations will be called on to assist with emergencies.

In the meantime, fighting hunger in the long-term will require a real global financial commitment. The World Bank has estimated that the developing world will need up to US$100 billion per year to build resilience in the face of a changing climate. And new U.N. estimates show that an additional US$267 billion per year would eradicate world hunger sustainably by 2030. These would come in the form of pro-poor investments in rural and urban areas, and social safety nets. While the billions of dollars required may seem like a lot, it’s a tiny resource commitment in the overall global economy.

Finally, fighting climate change will be especially critical. Climate change is already making the fight against hunger much harder. Unless we slash emissions and boost investment in adaptation now, the chance of eradicating hunger will be out of reach. Climate change will not only reduce production, it will also reduce the nutritional value of both crops and livestock, worsen human health, and lead to higher prices. Climate change will mean that many more people will not be able to afford enough to eat, and this toxic mix is likely to hit regions that are already more susceptible to food insecurity.

AM: Women are responsible for the majority of food production in many developing countries, and yet have severely limited access to markets, land, and credit. If women had equal access to these resources, their efforts could reduce world hunger, lower child malnutrition, and raise the incomes of rural people. Women face the greatest inequalities of all, and I’d like to see that change for the next generation.

Despite the many challenges women face, they are often the key agents of change in their communities. They are at the center of efforts to increase food production, ensure good nutrition for their family, and adapt to the impacts of climate change. Right now, they are fighting back—and we must join their fight. With investments to increase food productivity and resilience to a changing climate, women can make the move from daily subsistence and reliance on aid to providing a better, more sustainable life for themselves and their families.

FT: What action or change could every person take to help turn this vision into a reality?

AM: Our consumer decisions are powerful. Changes in how we buy, cook, and eat can make a big difference for people all over the world. Oxfam has outlined five simple tips for people heading to the grocery store or preparing to cook a meal. We call it our ‘Eat for Good’ guide and offer recipes online to go along with each step:

In addition to these steps, we encourage people to stay informed and engaged, whether by joining one of Oxfam’s campaigns or writing to your member of Congress about policies that impact global poverty and hunger.

Eva Perroni was a Research & Writing Fellow at Food Tank and a freelance researcher-writer and activist focused on promoting sustainable food systems. She holds an MA in Development Studies from the University of Melbourne, maintaining a strong research focus on global food security and food and agriculture politics. From learning traditional Sicilian recipes in her Nonna’s kitchen to campaigning for Food and Climate Justice, Eva’s love and passion for fair and healthy food are continuously growing. Follow Eva’s food reporting at EvaPerroni.com

Switching Out The Beef For Rabbit: Can Rodents Provide A Sustainable Meat Alternative?

A Note on Business, Climate, and White House Action as the U.N. Meets in New York