Impact Justice, a nonprofit dedicated to justice reform, recently released a report that finds the low standards of food in prisons can have long-term negative impacts on people who are incarcerated. Report Finds

In Eating Behind Bars: Ending the Hidden Punishment of Food in Prison, Impact Justice describes the types of foods and conditions under which food is served in state prisons. The report also highlights emerging efforts to make nutritious food a priority.

“We hope to raise awareness about this topic and the serious repercussions of feeding people in prisons the way we’re currently feeding them,” Leslie Soble, lead author of the report, tells Food Tank. “It really does have serious consequences that impact physical health, mental health, sense of self-worth and dignity, and people’s ability to reenter society.”

The report finds that the current prison food system has unacceptably low standards. States spend under US$3 per day to feed one person. Meals have small portions and consist of largely processed foods high in carbohydrates, fat, and sugar and almost no fresh fruits and vegetables. With the average incarcerated person eating over 300,000 meals in prison, meals lacking essential nutrients can lead to malnutrition and chronic illness, such as hypertension, behavioral issues, obesity, and weakened immune systems. Many people leave prison more malnourished than they entered.

The quality of the meals can also make recipients feel degraded or humiliated. Formerly incarcerated people report being served spoiled food or food marked “not fit for human consumption” on numerous occasions. Participants of the study also say that kitchens were often unsanitary, sometimes even lacking soap and hot water. And according to the report, incarcerated people are six times more likely than the general public to be sickened by foodborne illness.

Soble and her co-authors spent over 18 months on the report and saw how the coronavirus pandemic drastically impacted the already troubling food practices in prisons. Facilities have reduced mealtimes to twice a day and no longer have the capacity to respect people’s dietary restrictions.

In some facilities, kitchen workers still had to report to work even if they were showing coronavirus symptoms. In the most extreme cases, prisons locked down and did not allow people to leave their cells. During these periods, meal deliveries to cells were inconsistent.

Soble points out that while no prison is a perfect model for its food policies and practices, some prisons are making positive changes and showing what is possible.

The Mountain View Correctional Facility in Maine, for example, planted a garden and an on-site apple orchard to grow produce for their kitchen. At the beginning of the COVID-19 pandemic, the food services director reached out to local food producers whose supply chains had been disrupted to redirect their produce to his facility.

Other facilities have reconstructed their dining environment to be more light and hospitable. And prior to the pandemic, some organized visitation cookouts for people to reconnect with their families over food.

“We use food to communicate identity and relationships and values. And currently, we’re sending a message to and about people who are incarcerated … that’s basically saying you’re not worthy, you’re not fully human, you don’t matter,” Soble tells Food Tank. “These are human beings who are incarcerated, and we need to choose to send a different message through food.” 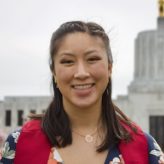